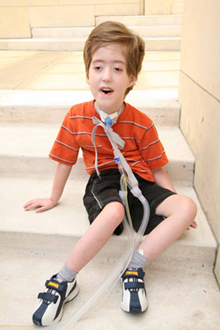 Some people said, “It will be ok. God wouldn’t do that to you again”. To which I replied, “Didn’t He allow it the first time?”. (In hindsight, we know plenty of people who have more than one child with Myotubular Myopathy). There was no turning back now.

[*We are ardently pro-life (although you wouldn’t know it by reading about our son, Elijah). The truth is that we were ardently pro-life then, before he existed, too. From that experience, needless to say, we learned a fast, hard lesson about judging people – and why it is wrong.*]

Back to my pregnancy. At 12 weeks gestation, I went to Ft Worth, and I had a high-resolution ultrasound done that confirmed that I was carrying a boy. Excitement and fear, all rolled into one, surfaced. One month later, my husband was offered a job in Houston, TX, and he accepted. I busied myself with packing and cleaning and taking care of LeeAnn. My husband left a month later to start working in Houston, while I continued wrapping up the loose ends and waiting for my daughter’s school to be let out for the summer.

In June of 2002, 6 1/2 months pregnant, I drove my daughter to Houston, and rejoined my husband. I hated leaving Elijah behind (his grave). It was very difficult – the one-year anniversary of his death was 3 weeks away. I felt so torn inside.

She briefed one of the NICU teams and had the nurse managers on stand-by for Benjamin’s arrival. We told her that we would accept nothing less than 100% to be done for our son, should he be born with the disorder. She assured me that they would do everything within their power to help him if he ended up in their NICU.

We tried everything we could to determine if our baby had MTM:

The only thing about this pregnancy that was the same as the last one, was the occurrance of polyhydramnios – excessive amniotic fluid.

The OB doctor, NICU doctor, and I decided that we should induce labor – this way, the day / time would be planned and a NICU team could literally be prepped and waiting. The baby’s due date was on Sept 18th, and the doctors chose the induction date of Mon, Sept 16th. My family was called and prepared themselves to be there for the big day!

Meanwhile, my husband and I incorrectly assumed that even with all of the assistance in the world, our son, if affected, would surely only survive for a week or two at best (maybe we told ourselves this to console ourselves over the horrible decision that we made about Elijah? Who knows?) At any rate, we busied our minds with where we would have his funeral, his burial, what his service would be like, and how we would transport his body – would we get a ‘permit to transport a body’ and do it ourselves?. (Sad… but true).

On Sept 11, 2002, I toured the NICU to see exactly how it was set up and how close it was to where I was scheduled to deliver. Later that afternoon I was watching some of the programs about the anniversary of 9 / 11, when I started having contractions. Not sure if they were Braxton-Hicks or not, I ate half of a sandwich and laid on my left side in an attempt to get the contractions to go away. Every day this week, I had false labor contractions, packed up and went to the hospital, only to be told that it was not time. Each time though, an ultrasound was performed, and I was surprised how the baby would be breech one day and then the very next day be in the head-down position. (This was because of the high volume of amniotic fluid. There was so much that he had plenty of room to do flips, even at 39 weeks!)

So, on this night, we packed up to go to the hospital again. I really assumed that it would be false labor again and that we would be sent home, and was surprised to find out on arrival that I was already at 5 cm. What? No! It wasn’t the right time- my family wasn’t here yet, and it would take them about 8 hours to get here.

What now? Where should LeeAnn (our 7 year old) go? We didn’t know anybody here… On top of it all, our OB was not available, and we had to see her associate who was on call that night. She immediately wanted to break my water – but I refused. I realized that this might be my last pregnancy, and I wanted things to go MY way (as much as possible), for once! But, the crass woman actually said to me, “Look, I don’t wanna be up all night with this pregnancy – I got a scheduled surgery at 7am”. I said, “I’m sorry, but I don’t want the bag torn”. She said that she would give me one hour, and if I weren’t dilated at least one more cm, she was going to break the water.

As soon as she left, I jumped out of the bed and began doing squats. I eyed an exercise ball in the corner, and began doing some exercises to promote dilation. When the doctor came back in an hour to check the dilation progress, she said, “I am really surprised to see that you are dilated an additional 2 centimeters…”, as she tore the bag. I was so mad at her – I wanted to kick her. Instead, she got her justice when my bag of ‘polyhydramnios’ water came gushing out, drenching her!

Needless to say, this sped up the delivery; none of my family (called earlier) were able to make it in time; my daughter had to be in the LDR with my husband and I (poor thing!); and I ended up delivering my son, by myself, in this cold city (LeeAnn, not being able to stand my screaming – ran out of the LDR in a panic. My husband was ordered to go after her immediately because of “hospital policy that children under 14 could not be in the hallways without adult accompaniment”). I didn’t use any pain medicines because epidurals do not work on me (long story), and the demerol that I took a few hours before Elijah was born was surely to his detriment – think about it: an already severely weakened child being doped up on demerol, too? I just couldn’t take that risk this time.

He was all cute and pink / red, curled up in a tight ball. I breathed a sigh of relief! (Remember that Elijah tumbled out, quite literally like a rag-doll – the room falling instantly quiet).

This room was quiet, too, but only because I was one of only 3 other people in the room, and one of them was Benjamin. I scanned his face and began trying to decide who he looked like – I couldn’t quite tell. Before I knew it, someone came in and picked him up and began to carry him off saying something about cleaning him up. As they picked him up, my heart sank to see that both of his arms dropped straight down behind him. That’s when I knew he had ‘it’. I was deeply sad for him, for us, for me.

Benjamin was 19 inches long and weighed 7 lbs, 5.5 oz. He had thin, light brown hair, glowingly white skin, and hazel colored eyes. He was intubated at 6 minutes after birth and immediately placed on a ventilator. During his stay at the NICU, he failed extubation twice – both times lasting only about 5 days before he had too much of a ‘work of breathing’. He had a muscle biopsy done at one week of age, and his blood was drawn and sent to the University of Chicago for diagnosis – it came back after 6 weeks confirming the diagnosis of Myotubular Myopathy and giving us his specific mutation. He had trach / g-tube surgery at 1.5 months of age, and he came home after 2.5 months of living in the NICU.

In our home, we have home nurses, monthly DME deliveries, and every piece of equipment imaginable stowed in every space available. Benjamin is now 5.5 years old and is an intricate part of our lives, so loving and adorable. He attends preschool at the public school, drives his power chair, and is such a delight. And gorgeous – my gosh! I’ve never been so in love with such a smart little man. He is clever beyond all belief, and we cannot imagine life without him. He totally, completely rocked our world, and we are forever grateful…